Determiners are words that introduce nouns. These are the different types:

The grammar rules for determiners are that they:

Here are some examples of determiners used with the noun 'house':

Determiners are commonly used as part of noun phrases, which will also include a modifier (an adjective, another noun, a possessive form, or an adverb-adjective combination).

Here are some examples of noun phrases that consist of: 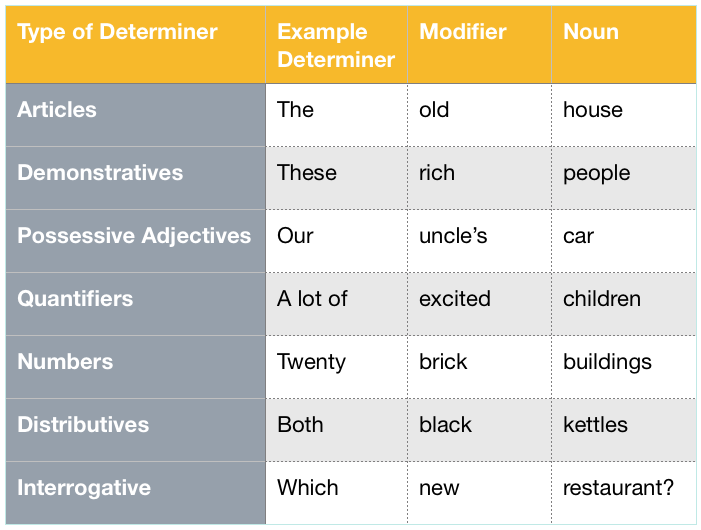 Here are some more examples of determiners with nouns in sentences. The determiner is in red and the noun is in bold. Note the modifiers separating them in certain cases:

Articles can be definite articles (the) or indefinite (a or an). The is used when the speaker thinks that the listener already knows what is being referred to. Otherwise a (before consonants) or an (before vowels) is used.

There are many rules though around articles which need to be studied carefully.

Demonstrative determiners are used to identify or point to a particular person, event, or object. This and that are singular. These and those are plural.

Possessive adjective determiners function as adjectives rather than pronouns. As they are adjectives, they appear before the noun that they are modifying.

Quantifiers provide approximate or specific answers to the questions "How many?" and "How much?"

Numbers are either cardinal (one, two, three, etc.), which are adjectives referring to quantity, or ordinal (first, second, third, etc.) referring to distribution.

Distributive determiners are used to refer to a group or individual members of the group. They reveal more about how people or things are distributed, shared, or divided.

Interrogatives are used to ask questions. Which as a determiner is used to ask about a specific group of people or things.

What as a determiner is used when we are asking a general question. Whose is used to ask a question about possession.