Parts of a Sentence

The main two parts of a sentence are the subject and predicate, with the subject identifying whom or what the sentence is about and the predicate giving more information about the subject.

We'll now look at each of these in more detail. 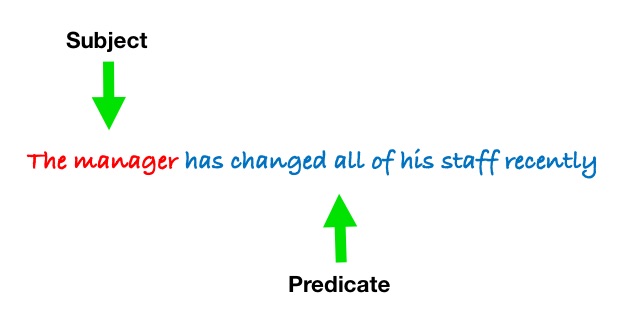 It is usually a noun or pronoun and can also include modifying words, phrases or clauses. Here are some examples of subjects in a sentence:

While the subject is what the sentence is about, the predicate is what is being said about the subject.

It will always include a verb but will usually also include other elements. So these are what it will/may include:

In the examples below, the predicate is in bold.

Predicates as parts of a sentence can get a little more complex than this as there can be predicates within predicates when there are other clauses in the sentence (the ones above have just one clause) and there are also compound predicates.

We will look in more details at predicates in another lesson.

The predicate always includes and starts with a verb, but it may also be followed by objects.

A direct object is the receiver of the action within a sentence, and it is usually a noun or pronoun. They are used with action verbs and are shown below in bold:

Indirect objects can only be in a sentence if there is also a direct object. They indicate to whom or for whom the action of the sentence is being done. Again, the indirect object is usually a noun or pronoun.

They are shown below in bold (the direct object is now the last noun).

Learn more about the difference between direct and indirect objects.

It was explained above that objects are used with action verbs. However, for state verbs (verbs that describe a state of being e.g. is, see, hear, feel etc) subject complements follow the verb.

A subject complement renames or describes the subject, and again is often followed by a noun or pronoun, but also commonly an adjective.

Parts of a Sentence Summary

The parts of a sentence can be divided into two main parts:

The predicate will start with a verb and could have various other elements: