Direct and indirect objects are key parts of building sentences that you should understand. Here we will look at the key difference between them.

Objects in sentences refer to someone or something in relation to the subject’s action of the verb. They come after the verb (and any words or phrases that modify the verb). So the pattern is Subject + Verb + Object. 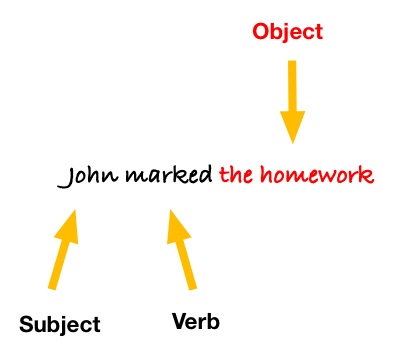 There are two types of objects in English grammar, direct and indirect objects.

The example above is an example of a direct object. A direct object is the receiver of the action within a sentence and it answers the question "who?" or "what?".

So in the first case, the action (the verb) is the marking and it is the homework that is receiving this action i.e. it is being marked. In the second case, the receiver of the action - the hitting (verb) - is Susan, so Susan is the direct object.

The indirect object is the recipient of the direct object. Or in other words, it identifies to or for whom or what the action of the verb is performed.

John bought his son a present
(For whom did John buy a present?  = his son)

The office staff gave Phillip a card
(To whom did the staff give a card? = Philliip)

Examples of Direct and Indirect Objects

Sentences with Indirect and Indirect Objects