The 8 parts of speech in English are: Nouns, Adjectives, Adverbs, Verbs, Prepositions, Pronouns, Conjunctions, and Interjections.

A part of speech is a category of words that have similar grammatical functions or properties. In other words, they play similar roles in a sentence. For instance, a verb shows the action of a subject or the subject's state of being. 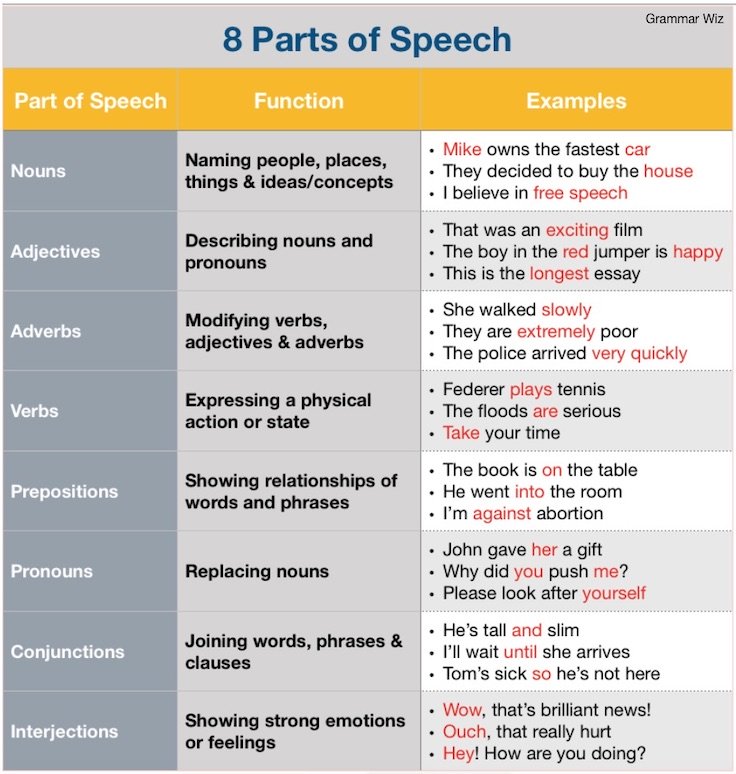 We'll now look in more detail at the function of each of these parts of speech.

Understanding the 8 Parts of Speech

Nouns are words used to talk about people, places, things, or ideas/concepts. Here are some examples:

There are both common nouns, used for classes of  people, places, things, or ideas/concepts, and proper nouns, which is their given name, always with a capital letter.

Another of the 8 parts of speech are adjectives. They describe nouns or pronouns. They can come before or after the noun/pronoun they describe:

These are absolute adjectives, but they can also be comparative (comparing two or more things) or superlative (showing degree or quality):

Verbs form part of the predicate of a sentence.

In relation to the subject, they are used to express a physical action (e.g. walk; speak; show) or a mental action (e.g. think; feel; want). They can also express a state of being, mainly with the verb 'to be' but also some others.

These though are main verbs. They have many other uses in a sentence so you should read about all the types of verbs further.

Another of the 8 parts of speech are prepositions. These show the relationship between two words or phrases in a sentence. They precede a noun or pronoun.

Commons examples of prepositions are above, up, upon, at, before, behind, since, to, through, under, until, with, within, about, against, along, around, beside, between, down, during, below, by, except, for, from, in, into, like, near, of, off, on, toward.

In these example sentences with prepositions, the two words whose relationship is being expressed are underlined and the prepositions are in bold:

Pronouns replace nouns and they prevent us from repeating the noun in a sentence. These are the types of pronouns with some examples:

Here are some examples of these words used in sentences:

Conjunctions are the of the 8 parts of speech responsible for joining together words, phrases, or clauses. There are three types:

Interjections are words used to express an emotion or a sentiment such as surprise, joy, disgust, fear, excitement, pain, or enthusiasm.

They usually appear at the start of a sentence and are not connected to it grammatically. Here are some examples of interjections in sentences:

Are there only 8 Parts of Speech?

Sometimes rather than 8 parts of speech, you may see 9 or 10 listed. This is because some people treat articles and determiners as separate categories.

However, when there are only 8 parts of speech considered (as above), this is because as these two types of word modify nouns, they are classified under adjectives.