Nominalisation (or nominalization in US English!) is when we take verbs or adjectives and turn them into nouns or noun phrases.

So in other words, we are transforming actions or events (verbs) or descriptions of nouns and pronouns (adjectives) into things, concepts or people (nouns). 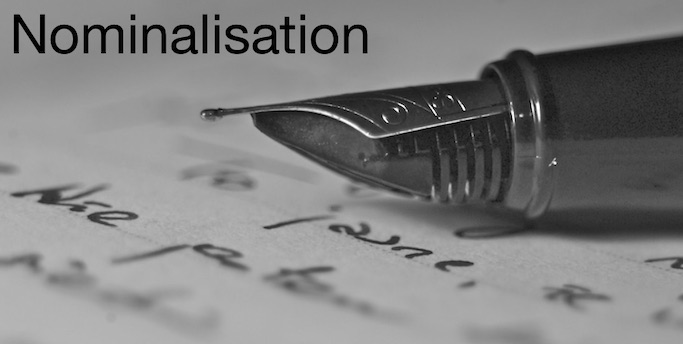 This is important for academic writing because it will:

Your writing will thus be more creative, varied, and interesting.

The easiest way to understand this is by looking at examples. Take a look at the following sentences. The verb is shown in red, and in the second sentence it has been nominalised.

'By the government' could follow after the word 'rules'. However, most people know it's the government who changes tax regulations so it can easily be left out and makes the sentence more concise without losing the meaning.

This next example of nominalisation also shows how this technique can make your writing more concise by using fewer words to express meaning:

Here are some examples of verbs being nominalised. There are of course 100s of verbs, so these are just some illustrations of how they are changed: 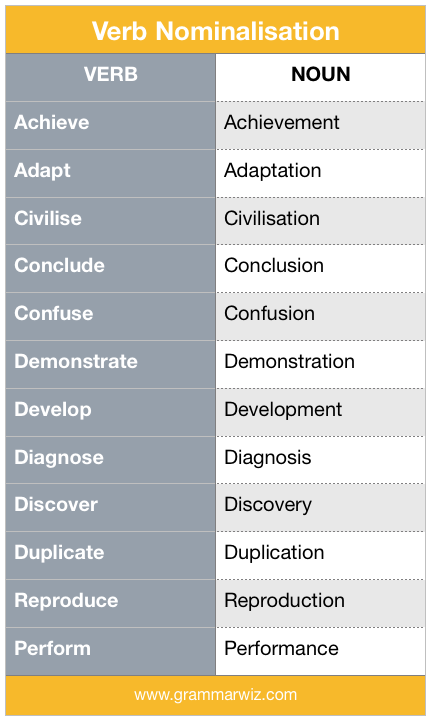 For adjectives, the same principles are followed. We transform the adjective into a noun:

It's worth noting at this point that when we nominalise, there is often more than one way to construct the new sentence. For example, we can also bring the adjective to the front of the sentence:

You'll also see the sentence has been made more concise by changing 'the clothes the speaker was wearing' to the 'speakers clothes'. It's a good skill in academic writing to be able to write things as concisely as possible yet in a formal style.

One of the most common reasons for nominalising adjectives in English is when the adjective has been used to denote a collective group. This is then changed to a noun by simply omitting the original noun in the sentence (people) and adding 'the'.

Here are some common examples:

Here are some examples of adjectives being nominalised. Again there are of course 100s of adjectives, so these are just some for illustrative purposes: 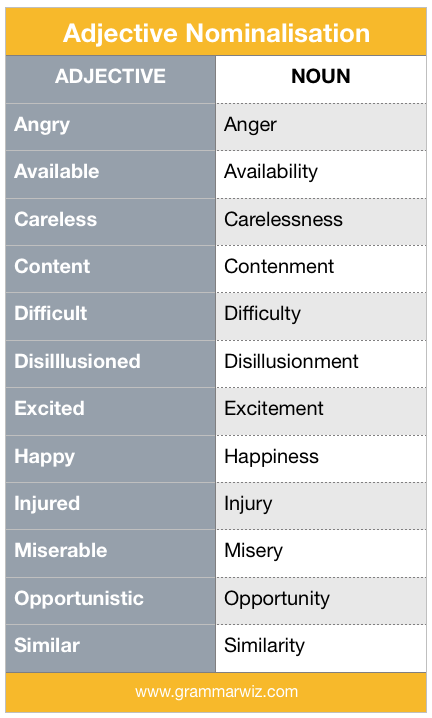 It has been noted how nominalisation is often related to academic writing so it's worth looking at a specific example of how it could be used to improve style.

When writing papers and articles in the natural and social sciences, for example, it's assumed that you will not refer to yourself. Take a look at the difference between these two sentences:

I analysed the data, which revealed the numbers of obese people had increased.

An analysis of the data revealed an increase in obesity

You will see how the writing has been depersonalised by omitting 'I' and nominalising the verb 'analysed'. In addition, the verb 'had increased' has been changed as this makes the whole sentence shorter (this has also involved reducing the relative clause).

Shortening sentences whilst retaining academic style and not changing the meaning is important when you are trying to write a paper within a limited number of words!

Nominalisation is also something a writing examiner will notice if you are taking the IELTS test. It's something that would be expected of someone getting band 7 or higher for grammar.

It can of course be used in essays, but also for IELTS graphs. Nominalising some sentences will give you a greater variety of structures. For example, the first sentence below is commonly seen written by candidates, but it can also be written another way:

The number of visitors increased sharply from 2005 to 2010

In the second sentence, the verb becomes noun and the adverb becomes an adjective. Both are ok but it's better to have a mix rather than relying on one too much.

Now check what you have learned in this nominalisation practice exercise >>>