Direct and indirect speech grammar rules vary so you need to understand them. We'll start by looking at what each one is. Note that indirect speech is also commonly knows as reported speech.

Direct speech is when the words are given in exactly the way that the speaker said them. So in other words they are quoted with no change.

When presenting direct speech, the words are usually placed in quotation marks, with a comma after say(s) / said if it is used to present the speech. Say(s) / said can also be placed at the end of the quotation, in which case a comma comes before it.

Indirect speech is also known as reported speech. You may also see it referred to as indirect discourse or indirect narration.

Indirect speech is the reporting of what someone else said in your own words but without changing the meaning of what was said.

Reporting verbs are used to present indirect speech. The common ones are:

That is in brackets as it can be omitted from the sentence, whether spoken or written. 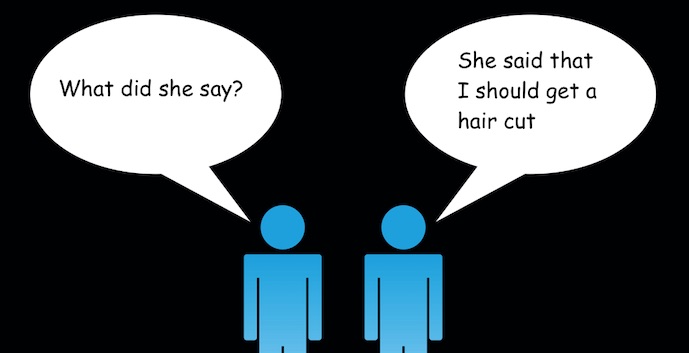 Direct speech is fairly simple to use and understand as it involves just repeating what was said. There is not much to get confused about with the grammar, apart from getting say(s)/said correct.

But indirect or reported speech is more difficult so we will look at that in more detail now.

With direct and indirect speech, there are three main things you need to be aware of when converting one to the other:

The tense of verbs when moving from direct to indirect speech do not necessarily change because if the circumstances of what someone said is the same, then it may be reported as that. For example:

However, as we are reporting what was said in the past, we often change the tense. This rule for this is related to backshifting, which means shifting back a tense. So the present will go back to the past. Some modals also change.

Here are examples using the previous examples of indirect speech, showing you how they look like in direct speech:

There are more details on the site about changing tenses in indirect / reported speech:

Pronouns in indirect speech also need to be changed from what they were in the indirect speech, as well as of course adapting the first pronoun to fit the person who said the statement:

You may also need to change phrases referring to time, though this depends on the context and when you are reporting the speech.

With these examples you have to assume the speech is being reported at a time in the future so the phrases such as 'yesterday' or 'tomorrow' would not makes sense any more in terms of the reported speech.

Some different rules apply when turning direct speech using imperatives or commands into indirect speech. Check out the rules here: